Posted on January 19, 2017 by AskthePlantMaster 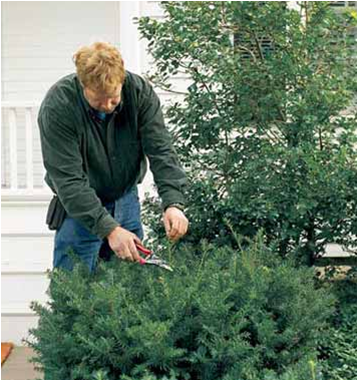 When I first began writing this blog, my intent was to inform homeowners that now (January) is not the time to be pruning their plants.  Because we recently experienced a few days of cold weather, some cold sensitive plants were slightly damaged.  I heard from many people asking if it was OK to prune their plants.  I immediately responded by saying No!  Because it is still winter, we’re still susceptible to freezing temperatures, which by the way does not have to be 32 degrees or below to cause damage to plants.  Pruning now while our temperature is above normal will most likely force out new plant growth which, should a hard freeze occur, not only cause die back of this growth, but potentially weaken and even kill plants.  Thus, the reason for this blog.

I’d like to begin by defining what pruning is.  It’s the selective removal of plant parts, and when properly done, keeps plants healthy and in their natural shape.  It should be a routine part of your landscape maintenance.

When pruning, always have a reason and anticipate the consequences of your actions.  Once you’ve removed a plant part, you can’t re-attach it and expect it to live.  If you aren’t sure, leave it on.  You can always prune later.  And one other comment, don’t severely cut back any plants unless you have to.

Whenever you prune, always properly use the correct tools as they were intended.  The size of the cut and type of plant materials will determine which to use.

If you are cutting live wood, bypass pruners work the best.   For dead wood, use anvil pruners.  Depending on the type of pruners you use, they typically are capable of removing plant materials less than 1″ in diameter.  Anything larger should require a different tool such as loppers, but more on this later.  Why is this important?  It will affect the healing and health of the pruned plant.  The cuts should be clean.  Trying to prune a plant using a tool not intended for its use can force the cutting blades out of alignment and will impact future cuts, which are usually not clean.

Making the actual pruning cut will depend on what’s being removed – tree branches vs. smaller material.  Generally when pruning, always make your pruning cut approximately 1/8″ – 1/4″ above an outside bud, as this will force growth to develop outward from a branch or trunk, rather than towards the center of the plant.  Doing so will allow the center of the plant to be open thus allowing good air movement.  Otherwise if branches are crowded, diseases may develop and in the case of trees, make them more vulnerable to breakage during windy conditions.

When pruning, always try to use as much of the cutting blades as you can with the hooked blade on the side of the wood to be removed.  All too often many will make cuts only with the tips of the blades, which often results in an incomplete cut and over a period of time, will cause them to wear down.

When pruning any tree branches emerging from the trunk, always make sure that your cut is outside the branch collar, which when completed should leave almost a perfect circle and will heal faster than if cut flush to the trunk.  Why?  Because the branch collar is actually part of the trunk.  To understand what a branch collar is, take a moment to look at any garment that has sleeves.  Notice the distinct line where the sleeve is attached to the body.  This is similar to what you’ll find on a tree collar – a line or slightly ridged area.

Returning to my earlier comments about the size of the cut, I said that if the cut is going to be greater than 1″ in diameter, don’t try to prune with hand pruners.  Instead use loppers.  Loppers have cutting blades similar to hand pruners but are larger and have longer handles to provide better leverage when cutting.  Depending on the size of the blades opening they can cut branches up to 3″ or more, especially if they have a ratcheting mechanism, which allows for larger cuts.  They are more expensive, but if you do a lot of pruning, they’re worth it.  Regardless of what you use, I prefer loppers with aluminum handles vs. wood.  They are lighter and cause less fatigue.  I also suggest that they have some type of cushioning mechanism where the metal parts come in contact with each other.

For large branches exceeding the capabilities of loppers, I suggest you use a pruning saw vs. a regular carpenters saw.  Because the larger branches will be heavier than others, they will need to be cut using a 3 step process as follows:

Remember, when removing any large branches, make sure that your body is situated so that when the branch falls, it doesn’t fall on you.  I’d also like to add that I don’t recommend the homeowner remove any tree growth above 12′ – 15′ from the ground.  Beyond that it’s too dangerous.  Leave it to a professional arborist.

When should you prune?  This will depend on the plant and the needs for:

What to do following pruning:

I have 50 years of horticultural experience, am currently a Master Gardener in Central Florida. In addition, I'm a Horticulture Instructor and retired Parks Manager and Arborist. I love plants and would love to help you with yours!
View all posts by AskthePlantMaster →
This entry was posted in Plant Knowledge, Pruning and tagged Pruning, Pruning in Florida, Use of Pruning Tools. Bookmark the permalink.